This map is based on Nuketown which is a popular map in Call of Duty: Black Ops. It has been designed to provide a great battle arena for close range battles. Weapons such as the bow have new textures and sounds to make it similar to a modern assault rifle. The map is recommended for multiplayer, but you can also spawn in custom mobs (such as NT Robots) to fight.

There aren’t any specific guidelines for playing this map but I recommend that you play it with other players. You can also spawn in mobs, such as NT Robots (husks) and fight against them in single player mode. Here is a list of changes.

This is a replica of de_dust which is a map in Counter Strike: Global Offence (CS:GO). Since it’s a player versus player map it’s highly recommended to be played by at least two players but preferably more. Command blocks are used for teleportation inside the map and for things at the shop. It’s a really well designed map with lots of cool details.

Choose a team and then walk through the (waterfall) portal to teleport to your HQ. There you can either go directly into battle or go to the shop.

You probably want to go to the shop first as you will need a weapon when fighting. At this moment there you can only choose the AWP (bow) but hopefully more weapons will be added in the future. You can also get a golden apple.

There’s a gun range at the shop where you can do some practice shooting at targets.

Once everyone are ready then press the Play button to teleport to the map arena. You need to decide on the rules yourself. E.g., when players are supposed to start and so on.

The map is super detailed and it’s very likely that you’ll recognize the map if you’ve played Counter-Strike in the past.

Important: This map requires alpha version 1.0.5 for Minecraft Pocket Edition. Android users can sign up for the alpha here!

Skyfall PvP is a player versus player map which can lead to some really badass sky battles. You’ll literally spawn in air with just a weapon and a pair of elytra wings. The objective is to be the last player alive. It’s not going to be an easy accomplishment since you need food and weapons to survive and the only way to get around the different sky islands is by flying.

As soon as you’ve pressed the button at spawn you will be teleported far up in the sky and you’ll also receive a pair of elytra wings which you must quickly equip in order to survive.

Search the different sky islands for useful items (such as food or weapons) by flying. Since this is a PvP map you always have to be on the lookout for other players to kill or avoid depending on your strategy.

One way or another you’ll most likely reach the bottom sky island. Walk through the portal (as seen in the image down below) to be teleported to the island in the very top of the map.

There are lots of different floating structures which you can explore by flying, but it’s mainly a PvP map and that means you always need to be ready to fight.

Bring together some friends and fight for glory in this amazing Redstone PvP arena.

There are two competing teams and the obvious goal is to kill all other players on the other team. It could definitely be a fun map to play but to really get the most out of it see if you can get together at least four players.

To play this map you will need at least two players, but preferably more than that for it to be truly enjoyable. Split up on two teams: blue and red.

War of the Wagon is a fun multiplayer PvP map. The main objective is to destroy the competing team’s base by pushing a TNT minecart into their base. It requires some strategy as you’ll both need people to push the wagon and others attack the competing team.

To play this map you will need to be at least two players but if possible be at least four or more players.

Split up on two separate teams (red and blue) and then continue down to each team’s side of the map. Toggle the “ready lever” when your team is ready. Once both teams are ready a TNT minecart will appear on one of the two rails.

You are not allowed to cross over to the other team’s area before this minecart spawns.

The objective for both teams is to be the first team to push the TNT minecart over to the chunk of stones at the other team’s base.

Once the TNT minecart hits the stone wall it will ignite and explode. The first team to succeed in doing this wins!

To win we highly recommend spending some time working out a plan between your team members.

A village has been overrun by zombies and the inhabitants of the village have to get their gear and weapons and try to defeat these monstrous creatures from totally destroying their lands. This is a PvP map which requires at least two players. One team is zombies and the other one is humans. It’s a really well designed map with a simple PvP system.

This map is recommended for at least two players but preferably more. There are two different teams (zombies vs humans). Make sure that there is an equal amount of players on each team.

Before starting make sure that every player enters the graveyard and sets his spawnpoint by typing /spawnpoint in the text chat.

Once everyone are ready you are allowed to access the arena. Zombies will have to wait 1-2 minutes before the door opens to the arena.

Hunting Territory is a really fun minigame and PvP map which requires at least two players. There are hunter(s) and prey. Hunters are supposed to use bow and arrows to shoot down the prey and if you are prey you will have to do your best to try to get to the finish line unharmed.

This is a perfect replica of Dust2 which is one of the most popular maps in Counter-Strike. It’s probably only going to be interesting for people who have played Counter-Strike a lot and know the ins and outs of the map. It does include some redstone options in the beginning of the map which allow you to grab some gear and play as two different teams (Terrorists vs Counter-Terrorists).

As mentioned above, this map is mainly for people who have played Counter-Strike, otherwise it will probably look quite boring (I’ll admit!). 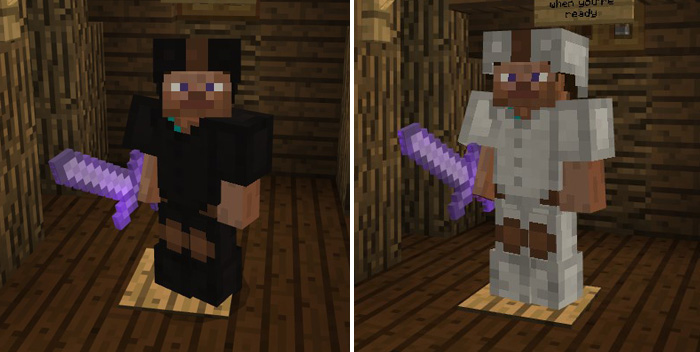 The Japanese Garden Arena is an awesome place to compete with your friends in battles to find out who is the best fighter. It has been specifically designed for 1 vs. 1 battles but you can also play it with bigger teams. The design of the arena is based on Asian architecture and it’s actually Luma’s (the creator) first time using that style to build. As a whole, it’s a pretty cool map.

Find a way to kill the other team. You are only allowed to bring one weapon into the arena.

As soon as one of the teams are dead then you can return to your team’s base by pressing the button.

There are two scoreboards (each on opposite sides of the arena) which you can look at to keep track of the current score. There are five rounds in the total.

This is a huge creation which is really useful if you are a big group of players who need a map where you can do your PvP battles. It also looks amazing and it probably took days to build. I would say it’s best suited for 5-20 players even though you can obviously play it with less.