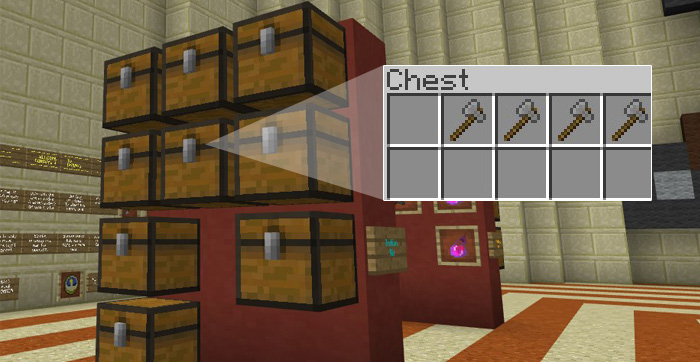 Cowboys vs Indians is an old childhood game which has been recreated in Minecraft Pocket Edition. It’s a team deathmatch PvP map where you select a side and then fight the other team with everything from primitive weapons such as tomahawks (axes) to more modern ones like pistols (snowballs). It’s a great map which can be played by up to 10 players!

This map can be played by anywhere between 2 – 10 players. You can either use the gear and weapon kits provided in the map or use custom kits.

Once everyone have entered the arena then make sure that each team stand at the black line at their base.

When everyone are ready then use the text chat to start a countdown from 10.

This is team deathmatch and the objective is to kill the other team. If you get killed you are not allowed to reenter until a round has been finished.

Challenge your friends (and enemies) in a duel. This is a PvP arena suitable for anywhere between 2-10 players. Its limited size makes it most suitable for melee combat (e.g. sword fights) as the bow is more suitable for long-range combat. The arena is very well built and this makes the map so much more cool to play!

Grab some food, a weapon and gear from the chests. Then walk into the arena and wait for the other player(s) to join. Once everyone have entered then start a countdown from 10.

The objective is to kill everyone in the arena and be the last one alive. You can play multiple rounds as you will respawn in the lobby once you die.

This map is an amazing PvP arena perfect for hunger games. The surroundings are only forest but there are lots of chests hidden around the forest to create an incentive for exploration. As it’s a quite big map we recommend playing it with at least four players but if you are more players that will definitely increase the fun.

This map can be played by up to 8 players. Each player should stand on a white platform and is not allowed to move until the game has begun. Start a countdown from 10 and then run to the center of the map to collect the items from the chests. Once another one minute or so have passed it is allowed for players to kill each other. The last man or woman standing is the winner.

It’s an enormous forest and all around it you will be able to find chests with some useful items.

There are lots of places to explore but it is built in the old world type of Minecraft PE to make sure you can’t hide forever.

Hunger Games Mars is an amazing looking PvP map which can be played by up to 24 players. Go to Mars and participate in a PvP survival minigame. All around the map there are hidden chests which hold everything from food, gear and weapons. It’s a necessity for your own survival to find these before anyone else does and then use them in a way to make sure you are the last man (or woman) standing on Mars.

To play this map you will need at least two players and maximum 24 players. Each player should stand on his platform. Once a countdown has been done and the game begun then it’s time to try to find some gear and ultimately kill the other players. The last man (or woman) standing will be winner.

It’s an amazingly big map so there are a lot of places to explore.

Looks like some comets have hit the surface of Mars and it seems as if they carried some precious metals.