This is a snowball war minigame for single player. You will be control over a character who you must defend against incoming snowballs. You must also make sure that neither of the incoming enemies invade your base. It’s a really fun and clever minigame which makes great use of both redstone and command blocks to enable really cool features.

You’re equipped with a snowball thrower which you can use to throw snowballs at the opponents coming toward you.

Simultaneously you will be controlling a character underneath your feet. You always have to make sure that he’s always safe and never hit by any incoming snowballs or else you will lose.

Winning rounds will earn you emeralds which you can use for buying new upgrades in the store (Tienda). 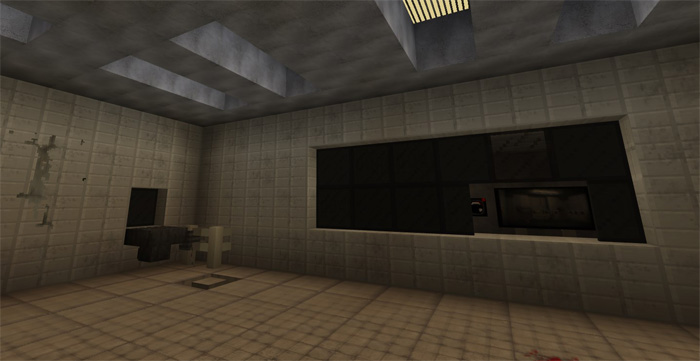 This map takes place in a chilling facility of horror. You’re stuck in there with a maniac (known as Jigsaw) who will force you through all kinds of crazy challenges to test your willingness for survival. All in all, it’s a distasteful and sick experience  (at least compared to the usual maps you’ll play). Even though it might sound harsh it’s actually a compliment because it is in fact a horror map.

There are lots of custom textures, sounds and other cool features.

TNT Run is a fun minigame which can either be played in single player or as a group in multiplayer. Either way, it’s a very intense minigame which takes place on a big platform made out of pressure plates, sand blocks and TNTs. Players have to run around on the platform to avoid falling down. The last person standing is the winner.

Press the Start button in the game lobby to start the minigame. Everyone will spawn in a glass box which is situated just above the TNT Run platform. A countdown will be initiated and then everyone will teleport to the platform. As soon as you’ve dropped down and spawned there it is time to start moving!

The blocks will fall down into the void underneath you and it’s your objective to stay alive as long as possible without falling.

After a round of playing most of the platform will be destroyed. It is automatically reset as soon as a new game is started.

Egaland is a modern city and actually one of the oldest ones for Minecraft PE which is still being updated regularly. The city consists mostly of colorful skyscrapers and other large housing objects but there are also awesome creations such as a museum and an airport which you can explore. As a whole, it’s a very detailed and beautiful city with a lot to see!

Disneyland is now also in Egaland!

The museum is inspired by the Louvre in Paris.

The airport is the biggest airport which I have ever seen in Minecraft Pocket Edition. It is incredibly detailed and it also looks very realistic.

The details are just amazing! I love it!

Anyone is allowed to use the map as long you give credits to qwertycyz123.

Get some friends together and challenge them in an awesome wool race. It’s a competitive map which is best suitable for 2 – 4 players. Players must search tens of different chests to find their wool color and then fill them in a path of empty blocks. The first player to fill in their entire path is the winner. Even though it’s a quite basic minigame it’s really a whole lot of fun.

There are detailed instructions in-game. However, it’s a quite basic game so it shouldn’t be any difficult getting started. Each player must choose and color and then they must fill a path with that color. The person who fills their entire path first is the winner.

There are three different game modes and they include easy, board game to an extreme free for all.

Shipwreck Island is suitable for survival gameplay and role plays. A cruise ship is stranded on a deserted island. There’s a small house on the island which works great as a shelter for the first night on the island. But to survive you will really have to start scavenging the ship or look in your surroundings for ways to survive.

This map is a showcase which demonstrates 12 different piston extenders. They basically use different redstone configurations in order to extend the push limit for a piston. The max piston extension is 12 blocks and with this map you will be able to learn to make multiple different variants.

This map features a relatively small house but with much more to show. There are over 60 redstone creations and together they use more than 500 command blocks. This is by no means your typical house but it’s actually most likely the best and most optimized house you can get for both survival and creative mode.

The White House has been the official residence and workplace for all U.S. presidents dating back to the 1800s with John Adams (the 2nd president of the U.S.) being the first one to live there. This map features the majestic mansion and many of the nearby structures and parks. It’s an incredibly detailed map with lots to see and explore. 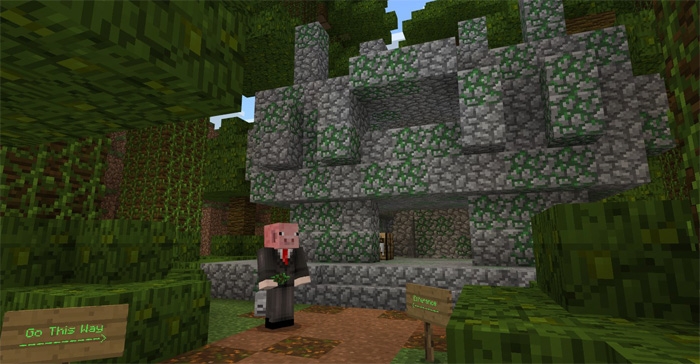 This is a minigame which takes place in an ancient jungle temple. There are several small challenges and plentiful of deadly traps which you have to complete in order to escape. Most of the dangers (such as traps) are automated by redstone and command blocks. The overall result is an intense and fun minigame which works really good for speedruns.

The main objective is simply to complete the challenges and find a way to get out of there alive. If you want to, you can choose to collect the emeralds. There are five emeralds in total.

The map is meant as a map to quickly speed through. Start a timer before heading into the temple and see if you can beat your (or a friend’s) record. The game starts as soon as you step on the emeralds.