This map takes place on an abandoned island where you play as a character who have been shipwrecked there and have to find whatever ways you can to survive. There are structures left on the island but there are no people to house them. All of it is like a huge mystery but an answer to it can not be certain.

You were out sailing and one day all hell broke loose on the sea.

You’ve been out for months sailing the seas and exploring the world but one day all hell broke loose. A raging storm destroyed your ship and soon you find yourself floating on some broken pieces of wood in the middle of the ocean. Luckily you notice something in the far distance stretching above the horizon. An island.. you’re saved! 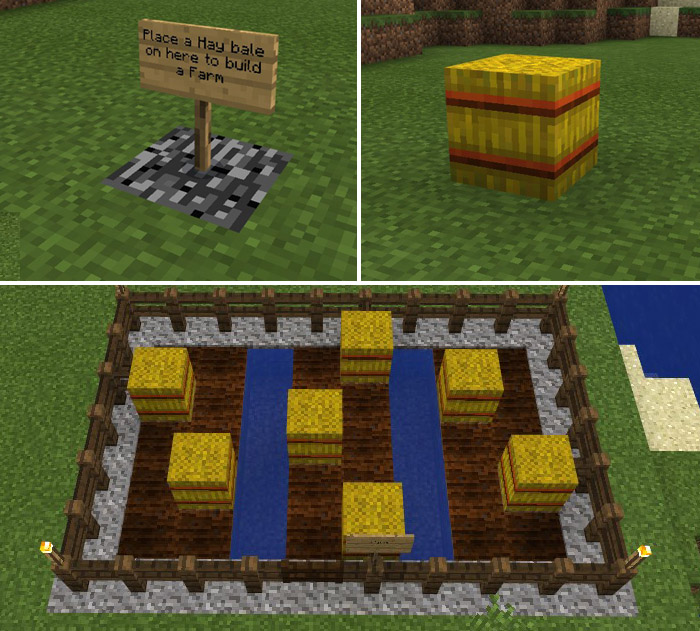 This is a survival minigame which takes place on an island which you’ve been shipwrecked on. The only thing you’re left with are your own survival skills. Around the island there are bedrock blocks which require other blocks in order to construct important structures on the island. You’ll basically need to collect different resources to construct the structures.

The spawn is on a small island out in the ocean. Here you’ve been shipwrecked and now you need to use your survival skills to survive on the island.

Around the island you will find signs with instructions for the requirements for constructing important structures. In this case, I needed to get a hay bale and place it on the bedrock block to construct a farm.

It’s a really fun survival challenge where by the time you are done with it you will be the owner of a nice island with lots of different structures.

This map is good if you are looking to set off your next survival adventure with a little bit of a story. You’ll start out on a small island with a lighthouse and from there you’ll take a boat to another island. There are few different custom made structures and some chests which will provide you the base necessities for surviving. Don’t expect too much though, it’s a fairly simple map.

4 Pillar Survival is challenging survival map where you will find yourself stranded on a skyblock island surrounded by four huge pillars. Each pillar symbolizes a biome (or in one case a dimension) and together they include most blocks which you would find in an ordinary survival world. You’ll also find a villager in each pillar which you can trade with to obtain better items and blocks.

The main objective is to survive for as long as possible. But there is also a list of challenges which you need to complete to complete the map. Some of the challenges might be impossible since that list was written for the PC version of this map.

You can find a full list of challenges here.

On the inside of each pillar you’ll find a villager.

There are also treasures and ores which might come useful for your survival.

This map spawns you on a skyblock island with very little resources. It’s up to you to use whatever survival skills you’ve got to survive for as long as possible. If your intention is to survive (which it should be) then I highly recommend that find ways to explore the other islands as they will provide the necessary resources you’ll need for your survival.

You will start out on a small skyblock survival island. The objective is to find a way to survive and gradually explore the other islands across the map. It’s not just the blocks you can use to survive but there is also a mob spawners which make sure you never run out of mobs.

There is no real end goal other than surviving for as long as you can.

This map is a skyblock survival challenge where the main objective is to reach the final island. You will start out on a small island with few resources. The resources have to be used carefully in order to one day have the necessary building blocks to create the bridges which will take you to your end goal. I provided some recommended guidelines but you can obviously use whatever rules you want.

The objective is a little bit different from other skyblock maps. In this case the goal is to survive on the meager resources available while continuously striving to reach the diamond island.

Find use of the resources on the island you are on and ultimately try to find a way to build a bridge to cross over to the other islands.

The resources get better as you progress to the next islands.

You have completed the map once you’ve reached the diamond island.

This is a map and addon which lets you try modern hunting in Minecraft. The bow has been replaced by a rifle both by textures and sound. And most of the mobs have been replaced and now include everything from bears, deer and buffalo. You can also wear camouflaged hunting gear. It’s a well rounded hunting map which is actually really fun to play!

The spawn is in a small hunting cabin located in an open plains biome. It’s great to have somewhere to return to after a long day of hunting. Anyways, once you feel ready it’s time to head out and start hunting!

You don’t necessary just have to hunt. It can get tiring after a while and then it is nice to relax with some fishing.

You’ve got to be careful. There are many different animals which can be found in the forests. Black bears are just one of many.

You can also spend your days doing some buffalo hunting.

Some of the mobs included here are not really ones which exist in real life. Unless, of course, there is some secret lab which I don’t know about which has been mutating cows. 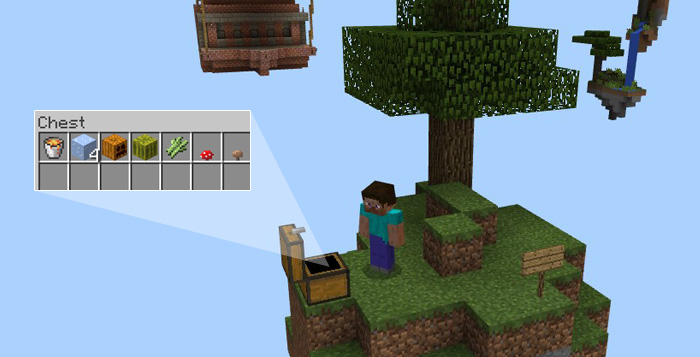 Simple Sky Adventure is a challenging map which forces you to try to survive the life on multiple different skyblock islands. Each island is different from the other and this creates unique difficulties where you always have to be on the lookout for new dangers which can cause a struggle for your survival.

The spawn is on a skyblock island with minimal resources. Grab the items in the chest to get started. But make sure to use the items carefully as you might otherwise run out of resources very quickly.

The objective is to explore all 10 different islands.

The only way to do that is by taking it one night at a time and try to continuously evolve and gain better items and blocks. Then use your resources to build bridges between the islands to continue on with the exploration.

This arena map is perfect for practicing fighting. You can spawn any type of mobs and fight many at the same time or do duel battles against just single mobs. It doesn’t really matter whether you are alone or have friends to play this map with as it’s fun practice either way. Put on some gear and train your combat skills!

Go to the center of the arena, open the trapdoor and go down the ladder to find a bunch of chests with food, gear and potions.

Once you’ve geared up return to the arena. In the other end of the arena you will find an item frame with a spawn egg which indicates the type of mobs you can spawn. Use the left button to spawn multiple mobs and the right button to spawn just one.

You can obviously combine the spawning as you find suiting.

Skyblock Biome is a world consisting of 9 different islands each resembling a biome in Minecraft. It’s a challenging survival map as it requires you to use only the resources found on each island to survive up in the sky. The ultimate goal is to explore all 9 islands and try to discover all secrets they hold.

The objective is to try to survive and find a way to explore all 9 sky islands in the map. In each island there will be some hidden treasures which you should find and then try to use in the most effecient way to develop your world.