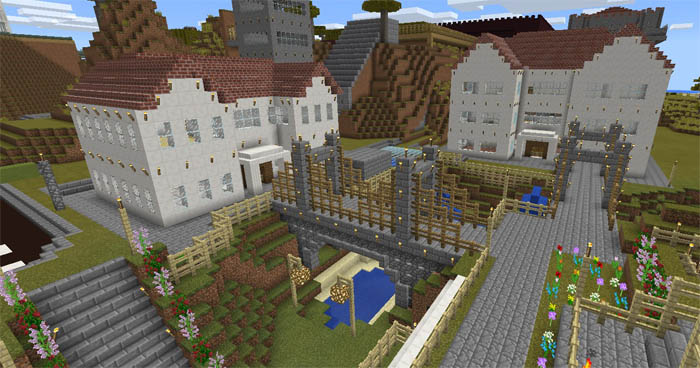 Mesaville is more than a village as it features everything from a naval base to impressive strongholds and other cool structures. It’s by no means a realistic city but that’s what I like about it. I guess you could say it looks very “Minecrafty” and as if these structures could have been an actual part of the game.

It took somewhere around 11 months to complete the map. Even once you think you’ve seen it all there are most likely much left unseen.

Here is a stronghold which you can hide in during the night to make sure you stay well protected against monsters. The structure on the right looks like an ancient Greek temple.

Another cool structure is the mansion which can be found on one of the hills in the map. It’s a two-story building with an inside swimming pool and a helicopter pad on the roof.

On the shore of the coast you will find a big container ship.

If you look closely at the water behind the ship you will see something whch looks like a secret base. You might wanna explore that some more!

Here is the naval base and here you will find a submarine and some army ships. Most things have an interior which you can explore.

At the naval base you will also find an airport with an airplane and a helicopter.

There are lots of more things to explore. But hopefully these images provided you with enough information to get you excited about this map!